One year old this week

It was exactly one year ago, on 18 November 2013, that Paula Middleton, formerly First Aberdeen’s Marketing Manager launched the jewel in their crown – the Platinum 19 bus service.

Paula, who recently joined the team at Abyss as their Account Director reflects back on the project and the Top Gun style launch.

“The Platinum project is probably the biggest, most important project I delivered during my time with First Aberdeen. It was almost 12 months in the making and there was plenty of blood, sweat and tears ( yes tears) when into Platinum.  It was worth it though to lead the Top Gun style service launch at the bus depot in King Street on 18 November 2013 is probably one of the proudest achievements of my career so far.”

Platinum 19 was the brainchild of Paula Middleton and she continued to be the heartbeat of the project before, during and after it’s launch. Platinum service 19 exceeded all expectations and delivered on every target set against it.

Most recently the service went on to win the Best Bus Service of the year award at the 2014 Scottish Transport Awards in Glasgow.

So what more can we say except HAPPY BIRTHDAY PLATINUM 19 from all the team at Abyss. 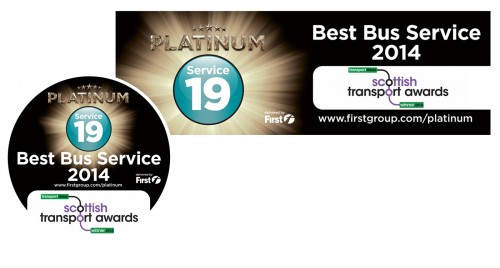 Read more →
Back to top